This was an easy one. Pi day (or pie day) is 3-14 and St. Patrick's Day the 17th, so what could be more fitting than an Irish pie?! After a good bit of drooling over recipes, and a check through my fridge and pantry, the winner was clear...chicken and leek pie.

Pre-adventure Jitters: So this one taps a number of buttons for me. This will be my first time using leeks. I know it's just a veggie, not rocket science, but I still get a little apprehensive any time there's a new ingredient on my board. Then there's the whole chicken shredding thing. Seriously. Who has the time or energy for that crap right now. Buuuttt if it says to flake apart my milk boiled chicken, flake I shall. My major anxiety is neither of those. It's the pie crust. I'm making my pie crust from scratch. I have some digestive issues with bleached flour. Bizarre, I know, but it is what it is. The recipe calls for packs of puff pastry, which is made with? Yup...bleached flour. I'm here to tell you, there's exactly zero chance I'm going to make puff pastry from scratch. Zero...as in no chance in hell. So I need to pivot a bit and use a plain pie crust...which I suck at. No joke...no exaggeration. We're talking SERIOUS SUCKAGE. They're just awful...either too tough, too wet, too dry, too chewy...take your pick. Something always goes wrong. My mom always slayed the pie crusts. You would have thought over the years that I would have absorbed something about the artform, cause she made a shit ton of pies in my lifetime. But, alas, no. I have no pie crust mojo. Mom always said I just needed more practice, so fingers crossed for a future pie enlightenment, but for now, really dreading the pie crust.

The Adventure: I have a confession to make. I had to Google what a leek was. I had a rough idea, but I wanted to be sure so I wasn't wandering through the produce section reading labels. Annndd then I had to look up how to cut said leek. They're like a super jumbo scallion, so do you include those massive green tops as you're slicing up the leek? The answer is...no. You can use the tops in a soup during a later cooking adventure, but for this recipe they get set aside. Armed with the knowledge of what I was looking for, I ventured out to the store early last week. I want my shopping trips to be as easy possible. I'm doing this for fun. I'm not a professional chef, and I'm certainly not making any money from these adventures, so part of why I picked this particular pie was the ease of the ingredient list. I could have selected a pie with beef and Guinness, but I had to find the beer. And there's no such thing as easily buying just one beer around here, so that would have meant leftovers from a six pack that I truly don't like. Soooo...I nixed that idea pretty quick. All I needed to buy for the recipe I chose was dijon mustard and leeks. How hard could that be, right? Welllll...harder than you might think. Turns out, leeks aren't very popular. I found my first leek at the third store. Yup...you read that right. I ended up traipsing all over creation to find those silly little leeks. And if you note the recipe, I actually needed two leeks. The store only had one. So before starting my pie today, I had to make a fourth stop at a grocery store to get the second leek. The convenience ship has now officially sailed on without me.

The cutting, slicing, shredding wasn't too bad...time consuming, but not a challenge. My postage stamp sized ham squares ranged between the small Love stamp and the large Bugs Bunny stamp, cause who has time to measure those things out precisely. And yes, you read that right...I said ham. I also had to Google rasher of bacon. Evidently, bacon is different in America. Mhm...yup...who knew? In Ireland, it's more like deli ham, not bacon at all. Sooo I happened to have thick slices of a smoked ham in my freezer and pulled those bad boys out for my "bacon". Then...just as I saw the end of the prep tunnel, while slicing the first leek, I noticed little brown spots appearing between the rings as I got closer to the green top. What the h...??? I looked a little closer and I discovered it was dirt. Because of the big fat leafy greens, dirt is almost impossible to get cleaned out before you start cutting. It's buried down deep in the nooks and crannies of every leaf. Soooo each ring with its very own grit collection needed slid apart and washed out. Yup...mhm...those leeks are the turning out to be the curse of this adventure. I plunked my chicken into its milk boil, started frying up the ham, added the leeks, annnddd realized I didn't have enough room in the pan for the chicken. Oh for pete's sake. Seriously. Could I possibly make this any more difficult?!? So you know that one pan that comes with the set...the super massive frying pan with the straight sides that you can't imagine ever needing to use? Yup...that's the one you need for this. You can do it in the 12" saute if you really have to, but you'll end up with leek rings, ham squares, and chicken shreds flipping over the edge as you stir. Truly...start with the big pan. The leek slices were also a bit of a thing in the pan as well. They didn't separate out into rings very well on their own, so I needed to flip each one up on it's end, press down, and pull out the individual rings. Mhm...really not a fan of the leak at this point. I also have to say, there wasn't much of a "sauce" element to this. The chicken shreds soaked up the liquid for the most part as I stirred, so it was more a matter of getting the mustard mixed in well, and everything coated. Assembled it all, stuck it in the oven, and waited...impatiently. The result? It's another winner. Very good...very very good. Next time, I'd probably reduce the recipe to one leek and add a cubed potato to give it a little bit of a rounder flavor, but it's a definite winner. And my pie crust? Ooooo...isn't it beautiful?!?! I hit it outta the park! It was flaky. It was crispy on the bottom without being leathery or chewy. It was golden brown without being burned. The pie crust universe was definitely smiling on me today. Here's hoping I can remember the tricks next time. Maybe my pie adventure on pi day was just what I needed to find my pie mojo. 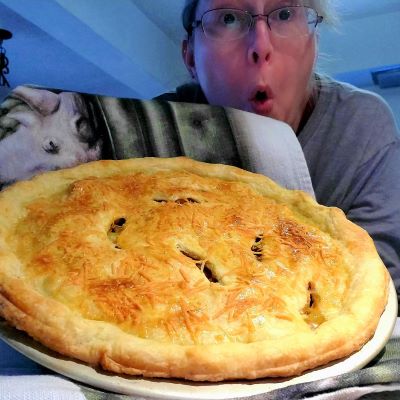 The Recipe (from Nigel Slater's Dish of the Day) -