I quit blogging several years ago. It became one more thing in a barrel full of one more things. The anxiety of what topic to choose...trying to be informative, slightly opinionated, maybe a little funny every week. As I started to get busy with the website, it all became too much and something had to go. The funny thing is, I've kinda missed it this past year. It's been a rough one for me. Between the quick pivot I needed to take in the business and major life changes with my parents, it's been a bit much to absorb. I ended up losing myself completely, to the degree that picking up a book or chatting online with friends seemed like a guilty pleasure I simply couldn't afford or maybe even didn't deserve. So as 2021 was ushered in, and 2020 was tossed in the dumpster, I made the decision to take care of myself more...to nurture my soul just a little bit every so often. Believe it or not, one of the most therapeutic things for me is cooking. I love playing in the kitchen and I really love eating. I tend to go more for desserts than savory, cause I'm what you might call a sugar whore. Blunt, yes, but I'm pretty sure you all know exactly what I mean. That being said, I also have an excessive collection of international cookbooks...seriously...EXCESSIVE. They eat the most delightful foods in the far reaches of the world. When I have some time to cook an actual meal, those are the cookbooks I hit up first. Soooo...here we are. My first blog post in 3 years...and my second adventure of the year in kitchen therapy. The first was German Springerle, but we'll get back to those at a later date when I attempt version 2.0. On the schedule today? Fastnachts. Growing up, Fat Tuesday (or Shrove Tuesday) was marked by the lip licking treat of freshly made donuts. I'm not sure when that tradition began in my mom's family...whether it was a centuries old thing or just something they picked up living closer to German communities in North Central Pennsylvania. I'm just glad it started somewhere, cause I love a good donut. The German fried dough splurge on Fat Tuesday comes from the same tradition as the English eating pancakes and the Polish eating pączki. Lent starts on Wednesday, so the fat and sugar needed cleaned out of the cupboards before the fasting began. Fastnacht literally translates as "Fast Night", but in donut form it's more like "OMG this is heaven in a puff of dough". Lol! The secret on why they're so good? Potatoes. No joke, there are mashed potatoes in the dough which takes these sweet treats to a completely different level of yumminess. Today's culinary adventure was a success... eventually. I had to bob and weave when it came to the frying. I went to the cupboard to grab my candy thermometer (which hasn't been used in a decade) only to find the top broken. Mhm...it's survival of the fittest in my house. I zigged and grabbed the digital thermometer, only to discover it didn't go up to a high enough temp. Sooooo I googled "how to tell if oil is hot enough to fry". To my complete delight, today I learned that you toss a single popcorn kernel into the hot oil. When it pops, you're hot enough to fry. So this is how I fried my fastnachts today. Popped a kernel, strained it out with my slotted skimmer and put my first batch of donuts in. Once those two were done, tossed in another kernel and waited for the oil to heat up again, then did it again. It was actually a bit liberating. No thermometer to fuss with at all, just me, my hot oil in a dutch oven, and popcorn to nibble on as my donuts were frying. You don't necessarily need a skimmer, but it made things super easy. They're large enough to lower the dough into the oil without any splashing and make it super easy to flip and take out, but you do you. I also used peanut oil, for the sake of reference, but you can use canola or sunflower as well. All 3 are considered neutral in flavor with a high smoke point, but don't leave that greasy film on the inside of your mouth that makes you feel like you just ate a candle. As for potatoes, I used yukon golds, cause, well, they're my go to potato. You could use a standard baking potato as well, but stay away from the fingerlings, redskins, or blues. Peel them, cube them, and boil them in salted water for about 12 minutes, until a fork pierces through them easy peasy. Drain and mash well... no lumps. Oh...and drain on paper towels, not a cooling rack. The paper towels will absorb the extra oil, but on a cooling rack that oil absorbs into the donut...again...like eating a candle.

- vegetable oil for frying (2.5-3 inches in the bottom of a deep frying pan or dutch oven)

Scald the milk. If you have a thermometer, this is 170 degrees. The point that you have the little bubbles around the edges and a skin forms on the top.

In a large mixing bowl, combine the scalded milk with the mashed potatoes.

Add ½ cup sugar plus the margarine and mix well. If the mixture is still warm, cool to about room temperature before proceeding with the next step.

Dissolve the yeast and ½ teaspoon sugar in barely warm water.

Cover with a towel and let rise for 25 minutes.

Add the beaten egg to the mixture. If you have one, switch to a dough hook in your mixer OR, continue using a large wooden spoon.

Add 4 ½ cups flour, mixing until it's well incorporated. Turn onto a well-floured board and knead for about 3 to 5 minutes. Add a small amount of extra flour if necessary so the dough can be handled without sticking to your fingers. Grease a large bowl.

Place the dough in the greased bowl. Cover with a thin towel, and let rise in a warm, draft-free place for about 2 hours or until it is at least double in size.

On a lightly floured surface, roll the dough ¾“ thick. You can use a doughnut cutter to cut the dough or cut as typical Fastnachts (cut the dough into 3 to 4" strips, then cut the strips into 3-4" squares)

Arrange the pieces of dough, about 1-½” to 2″ apart, on large silicone lined trays. You could also use waxed paper, but sprinkle just a bit of flour down first to keep the dough from sticking to the paper.

Cover each tray with a thin towel.

Place the trays in a warm place for 45 minutes to an hour, or until the dough pieces have raised to about double in size.

Deep fry until both sides are golden brown, turning one time. I timed it out at 1 minute 45 seconds, but it'll depend how dark you want them and how hot your oil is. The oil WILL splash on occasion, so this isn't a kid friendly activity.

Drain on paper towels. While still warm, dredge in the cinnamon sugar mixture. The heat of the oil will make the sugar stick better.

If you happen to have any left...like that could happen...you can store them in an airtight container for a couple days, but they're really best fresh. At a 4" size, I ended up with about 14, so the smaller the square, the more you get...obviously. Enjoy!! 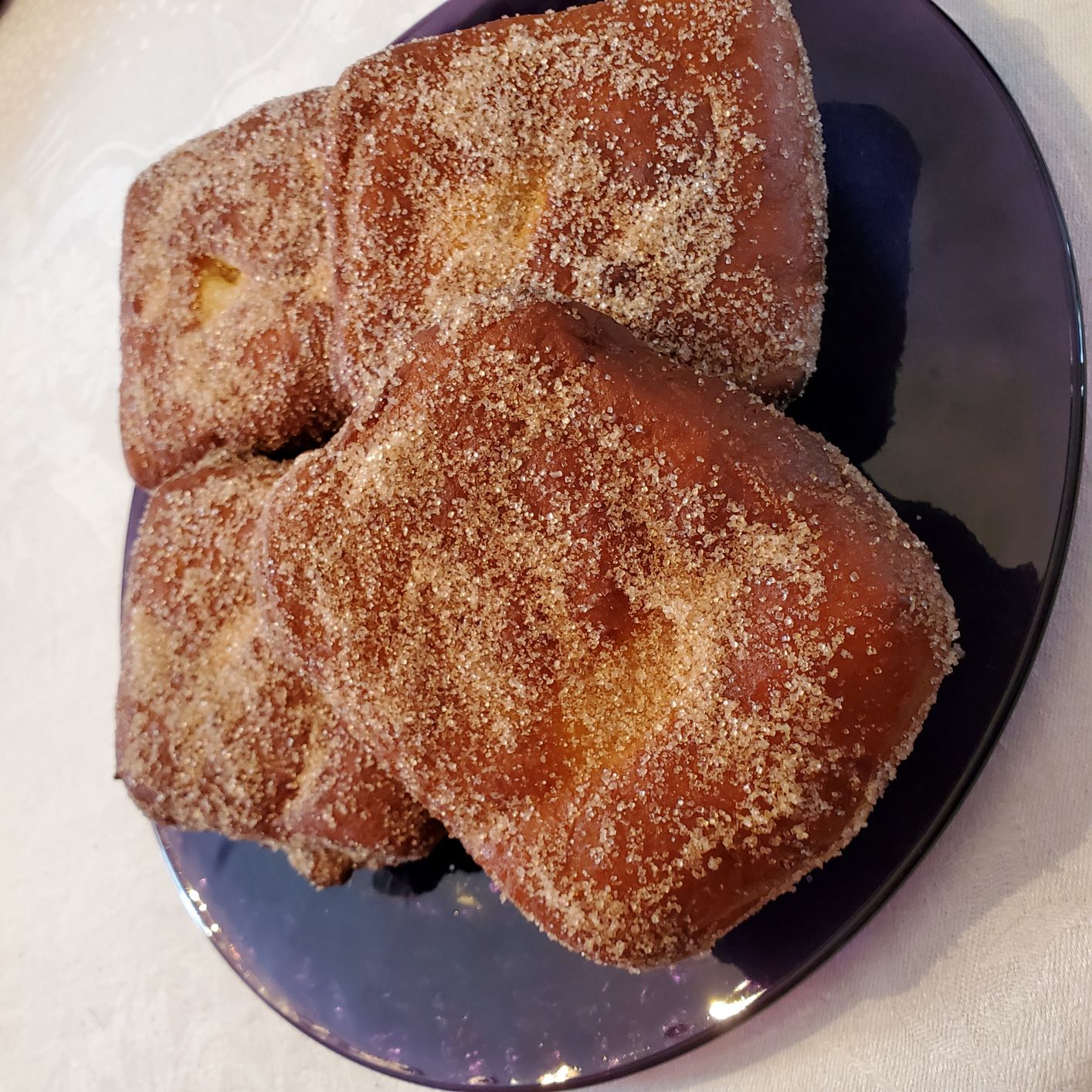