This week's adventure: I know, I know. I'm 2 weeks late on my next adventure. It's been a whirlwind of visitors, home projects, and unpacking boxes at the shop that threw me completely off my game in August...with pretty much everything. So we're back at it with just a little skip and venturing off to Fiji. Number one thing that comes up when you search on "the Google" for Fijian recipe? Ceviche. Oy.

Pre-adventure jitters: Have I mentioned before that I DON'T LIKE FISH? Hmm? Pretty sure I have, but if not, let me be clear. I DON'T LIKE FISH. I'm learning it's that I don't like fish that's not fresh...and most "oily" fishes..annnddd any fish that still tastes like fish once it's cooked, but I'm trying to put on my big girl panties and try new things. But seriously, I really don't like fish...in case I wasn't clear the first two times. Add to that the fact that ceviche isn't actually cooked to kill off bacteria. It's cured in acid. Go do a search on what can happen if your fish isn't fresh, cured fully, or you pick the wrong kind. Actually no, don't do that. Having just done that, I can tell you, it's a BAD idea. Very bad. But I set rules when I started these adventures to prevent me from picking and choosing only the easy and uneventful recipes. Soooo armed with a recipe from Arousing Appetites and a day where I can stay close to the toilet (just in case things don't, um, sit well), the adventure begins.

The adventure: Alrighty. The ingredient list isn't too scary. I find most of the fresh produce at the local Amish produce stand. Swing by the local Amish bent n dent and hit the jackpot! I found the coconut milk for fifty cents! Granted the can looks like something ran over it, but it's not broken open at all, so we snatched that bad boy up. The lemons, limes, and cilantro come from a standard grocery store, which leaves the fish. (sigh) So Mahi Mahi isn't a standard run of the mill fish around here, but we do have a fish market 30 minutes north that should have it. It's where I bought the shark a few months ago, and that was actually delicious, so I'm hoping they have it.

I really like the fish market. It's small, but they have the weird stuff that I like...monkfish, swordfish, etc without completely breaking the bank. Annnddd it's one of the few places where I've found shrimp so incredibly fresh, they're still blue in color. The problem is, getting there when they're open is a bit tricky. I can only get there Thursday or Friday after work...I close at 5, they close at 6...it's a 30 minute drive. Sooo it's a tight timeline, but possible if things go just right. Annddd they did. I called and had them pull my mahi first thing in the morning, so it was an easy drive up, purchase, and I was back home by 6:30. 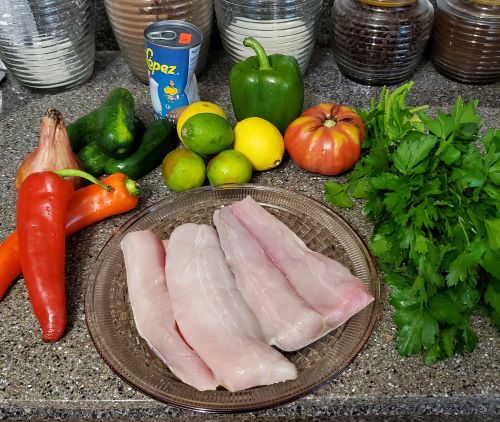 So the recipe says 2 hours. I googled mahi mahi ceviche and I found everything from 30 minutes to 5 hours as a cure time. Ahhhh great...clear as mud. This isn't exactly something I want to wing it on. According to the directions I've read on a ridiculous number of recipes at this point, cure it too little...potential vomiting...cure it too long...curdling and potential vomiting. (sigh) Perrrrfect. Annndddd then I see the word that literally makes my intestinal track seize up. Parasites. Dammit. What the hell have I gotten myself into??!!?

I go back to google and type in "ceviche what fish has parasites". Seriously? Why am I doing ANYTHING where I have to google the word parasite???? This is just wrong on every level. Found a list...mahi mahi has no potential for parasites. Ohhhh...thank you, thank you, thank you. I'm nervous enough about bacteria, curdling, and vomiting, I really don't need to add a parasitic infestation to the mix.

So I unpack my mahi, take one look, and my heart sinks. The skin is still on. (sigh) As much as I don't like fish, I like the prospect of skinning fish even less. I can count on NO hands the number of times I've skinned a fish. I grill is skin on, bake it skin on, fry it skin on, because the skin comes off SUPER easy that way. Soooo I now have to google how to skin mahi. Seriously. I'm researching this "easy recipe" more than I did my college term papers.

The advice I find? Hold it with something like a paper towel so it doesn't get away from you and simply pull the skin off. Okay, so really. I don't think you should ever refer to dinner as something that you have to hold firmly to prevent it from getting away from you. That's a visual I truly didn't need.  Annnddd I'm here to tell you. IT DOESN"T JUST PULL OFF.

Anyway, I finally get the skin off and move on to the cutting. The recipe says to use a simple knife. Annddd that doesn't work.  It doesn't cut through the entire filet. I move up to a serrated blade annddd that shreds the fish. Oh for pete's sake. So, I move on to my kitchen scissors and slowly, one cut at a time, chop my filets into little cubes. I toss it in a dish and start juicing the lemons and limes. It takes a TON of lemons and limes. We're talking a ton. But I'm making sure every whisper of fish is under juice. I'm taking NO chances that anything doesn't get cured. I put the cover on, set it in the fridge and walk away.

I opted to wait 4 hours before putting my ceviche together. I know there's a risk of curdling, but I'd rather risk curdling versus insufficient curing. i chop up all my veggies, open my very dented can of coconut milk, and stir in the drained mahi. I'm ready to dig in. 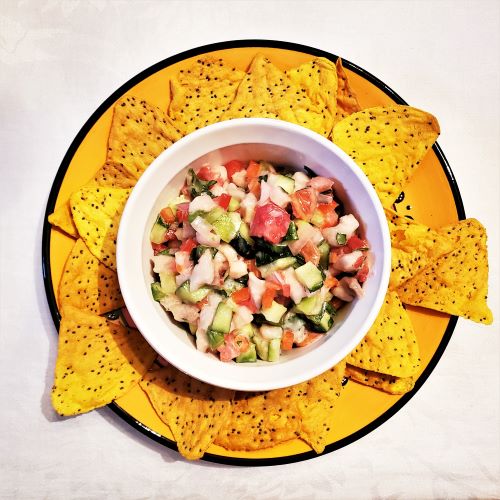 Okay, so not really ready. My stomach is already flipping at the prospect of getting sick. But I grab a chip, dip it in, and tentatively take the first bite. IT'S AMAZING!!!! The citrus, the coconut, the assortment of veggies all come together beautifully. It's seriously one of the best meals I've had through my adventures! This is a definite win. Well, it is assuming I don't get sick. Haha!

Serve your kokoda cold either in small bowls or in lettuce cups. Enjoy!