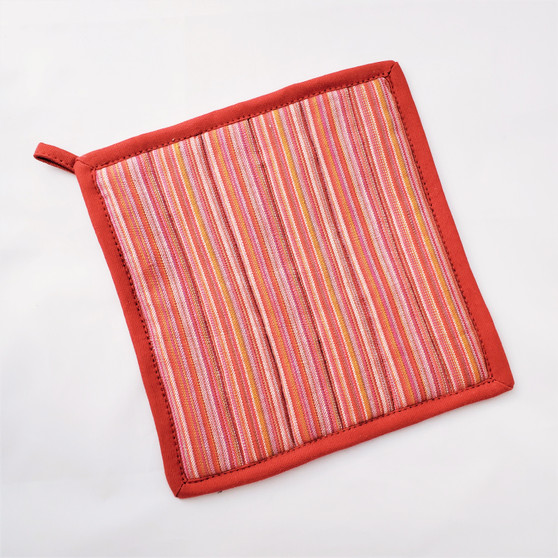 Cotton potholders are the "go to" for versatility. They keep your hand protected from the heat, are incredibly flexible, and when you get lasagna all over them, just toss them them in the washer to clean them up for the next cooking adventure! They make a perfect gift for the new homeowner or hostess and pair beautifully with a dish towel and wooden spoon for a delightful set.

The process in making something as simple as a towel is not simple at all. It all begins with the dyeing of the thread. At the Association for Craft Producers (ACP), all the threads for woven fabrics are hand dyed with environmentally friendly water based dyes. ACP has a 300,000 litre rainwater catchment where they collect water to use for dyeing. They also have a waste-water treatment facility for keeping any residual dye from entering the river.  Once the yarn is dyed and air or kiln dried it is then distributed to different weaving groups where it is wound onto bobbins to be used for weaving. Eighty women work at ACP’s facility in Kathmandu where they receive not only a fair wage but also skills, training, and a large social benefit package.

Finally, the fabric is passed on to the sewing unit. This group is supervised by sewing master Bijaya Laxmi Rana who ensures every piece is sewn to perfection.