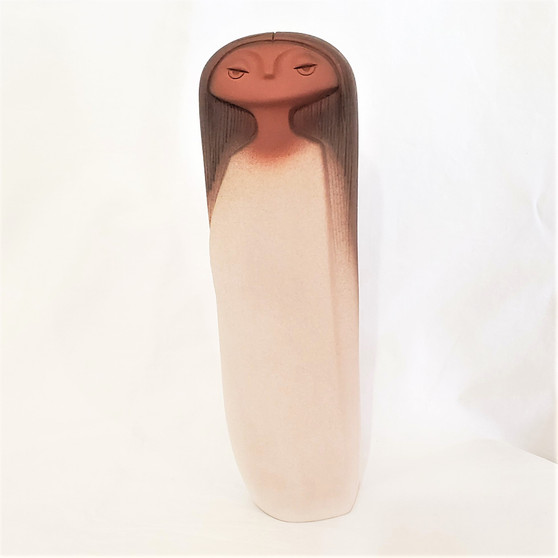 Pachamama makes the perfect gift for any woman in your life who loves the environment! Hand made out of ceramic, this figure will look stunning on a mantel, coffee table, or night stand.

Pachamama translates directly as Mother Earth. Pacha means earth in both the Quechua and Aymara languages of the Andes. Mama means mother. In Incan mythology, she was considered to be the goddess of fertility, nature, and the harvests. Water, Earth, Sun, and Moon, the four principles of the Quechuan universe, originate in Pachamama. The Andean people build shrines to her using hallowed rocks or in the trunks of legendary trees. In many artists drawings and sculptures, she appears as a women carrying a harvest of potatoes and coca leaves. Through her powers, life can be sustained, or made very difficult. She embodies the mountains and has the power to control earthquakes. In early times, Pachamama was depicted as a cruel goddess, needing frequent sacrifices to pacify her. After the Spaniards arrived, however, she was slowly united with the figure of the Virgin Mary and became perceived to be much more benevolent through the years. In modern times, she is stilled revered by many of the indigenous people in the Andes, many of whom believe that environmental problems arise when we take to much from Pachamama and don't give her the respect she deserves.

This cooperative in Bolivia employs nearly 30 women full time, and up to 100 women seasonally. They've been around since 1988 and offer training, product development assistance, and day-care for the children of their artisans at the workshop. The older children can help their mothers if they wish, building a sense of community, and the adults all collectively help the children with their studies.

Pachamama makes the perfect gift for any woman in your life who loves the environment! Hand made out…

Ceramic 11 piece nativity set from Bolivia, with the tallest piece approximately 2-1/4". Bolivia is …

Need a little sweet binge? Feeling the urge for an afternoon snack attack? We've pulled together the…

When you need a purse that can take some abuse, this is the perfect bag for you! Made from woven gra…

When you need a purse that can take some abuse, this is the perfect bag for you! Made from woven gra…

Perfect for a history buff or anyone loving a bit of individuality in their every day jewelry. Shard…

The women of Syria have been mastering the art of counted cross stitch for generations. It's an art …

Wool nativity in cave from the Holyland measuring approximately 3" tall. Made by the Bedouin women o…