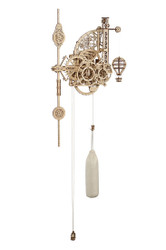 The time has come! For years, we've been hearing the same question again and again from our loyal customers: "Can Ugears create a working clock model kit, one that actually keeps accurate time?" A working mechanical wooden clock has long been our #1 "most-requested" new design. Your dream has also been our dream, and our team of dedicated Ugears engineers and designers has been working hard to bring this shared dream into reality. Finally, the wait is over. Ugears is proud to present the Aero Clock, a fully-functioning DIY wall clock with pendulum.

The Aero Clock isn't just a 3D wooden mechanical model, or a pretty showpiece. The Ugears Clock is an actual working clock that you can build yourself, mount to a wall, wind up, then watch as the seconds, minutes, and hours tick by. The Aero Clock is an ingenious puzzle and DIY clock mechanism, unlike any other clock. It is a lovely piece of precise engineering that reveals the workings of a weighted pendulum clock to builders and viewers alike. Like all Ugears models, it also has that extra touch of whimsy, to captivate and charm our growing legion of fans.

This simple-yet-elegant Ugears clock is driven by the force of gravity pulling down a weighted bag (you can fill the bag with sand or salt). Raise the bag on its pulleys to wind the clock. As the weight slowly descends, it rotates a drive gear, which then rotates an escape wheel through a reducer. The clock features an adjustable weighted pendulum which interacts with the escape wheel through the steady tick-tock of the anchor mechanism. You can adjust the clock's ticking action to the second, by sliding the pendulum's top and bottom weights. The reducer also transmits rotation to an hour disc and a minute disc. One of the interesting features of our Aero Clock is that time is not read with rotating hands on a clock face, but rather a fixed pointer indicates time on the slowly-rotating, numbered hour and minute discs. Moreover, these discs rotate counterclockwise—did you know that before standardization, some clocks moved clockwise while others moved counterclockwise? In the role of "cuckoo” the Ugears Aero Clock features a model hot air balloon. The suspended balloon rapidly descends when the hour strikes, then slowly rises again over the course of the next hour.

The theme of the Aero Clock is early aeronautics. Take a trip back in time to the dawn of flight and the "balloonomania" that seized France and England in 1783 on the occasion of the first free aerial voyage in a balloon. This was followed two years later by the first aerial crossing of the English Channel by intrepid aeronauts Jean-Pierre Blanchard and John Jeffries. We love this wooden model clock's steampunk sensibility and spirit of adventure, and we think you will too! Imagine yourself a discoverer of new horizons and a conqueror of the four winds. The casing and intriguing wooden clock mechanism represent an air base located among the clouds, where zephyrs blow and filtered rays of sunlight dapple the machinery, while you, in the role of aeronaut, launch a new voyage of exploration on the hour.

The Ugears wooden model clock kit celebrates the role of clocks in exploration. Did you know the problem of calculating longitude, critical to accurate navigation at sea, was solved with a clock? The idea was proposed by Dutch mathematician Gemma Frisius in 1530, but it wasn't until the mid-18th century when English clockmaker John Harrison developed a series of shipboard clocks so precise (accurate to within a ⅕ of a second per day) that ship captains could at last calculate their position at sea to within a few nautical miles. By knowing the exact time back in London (Greenwich Meridian Time, or GMT), and calculating the time at current position with celestial observation, navigators could calculate where they were on the earth's surface. Latitude had been solved by the Phoenicians as early as 600 B.C. with celestial reckoning—measuring the altitude of the sun at noon, or the angle made between the North Star (or other navigational stars) and the horizon. But the longitude problem would bedevil explorers for another 2,000 years. Harrison was eventually awarded the £20,000 first prize (roughly $1.5 million today) established in Parliament's Longitude Act of 1714, after demonstrating the accuracy of his masterful clocks at sea. Now you too can become a clockmaker, with the Ugears Aero Clock model kit!

Released at a moment when the world seems to have slowed down, the Ugears Aero Clock, a wooden wall clock with pendulum that you build yourself, is both timeful and timeless in its simple elegance. This beautiful and functional wooden wall clock model is for horologists, for hobbyists, for explorers, for creatives and romantics of every stripe, anyone who is ready for new challenges and ready to take risks. If you've ever gazed up at the sky and thought, "I want to be there!" or looked at a pendulum clock and wondered, "How does that work?" then the Ugears Aero Clock is for you.

As you build the Aero Clock, a wooden wall clock with pendulum, you will learn the basic principles behind clockworks, how the steadying influence of a swinging pendulum operates through a rocking anchor, locking and unlocking the gears on an escapement one second at a time, thereby regulating the (slow) descent of a weight as it drives both power gears and timekeeping gears.

The Ugears' Aero Clock with pendulum is a marvelous puzzle, and the perfect family project. When you work together to assemble this DIY wooden clock model kit, you will experience the satisfaction of building something together, and not just any model, but an actual functioning timepiece. Afterwards, you'll have a beautiful object for the home, something your family can enjoy together as time goes by.

The Mechanical Aquarium from Ugears is an ingenious saltwater fishbowl, with two pet tropical fish c…

Ugears, a wooden model and 3D puzzle company known the world over for its outstanding, retro mechani…

DIYers and hobbyists alike will discover a new pastime with UGears U-Fidgets vehicles. Each set cons…

The Mechanical Aquarium from Ugears is an ingenious saltwater fishbowl, with two pet tropical fish c…