Celebrating 16 years of supporting artisans around the world! 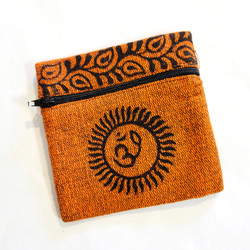 Little zip pouches can be so handy to have. Use them for change, for credit cards, lipstick, or those little bits and pieces that chuck around in the bottom of your bag. Block printed on a sturdy woven cotton, this pouch makes the perfect choice.

The process in making something as simple as a coin purse is not simple at all. It all begins with the dyeing of the thread. At the Association for Craft Producers (ACP), all the threads for woven fabrics are hand dyed with environmentally friendly water based dyes. ACP has a 300,000 litre rainwater catchment where they collect water to use for dyeing. They also have a waste-water treatment facility for keeping any residual dye from entering the river.  Once the yarn is dyed and air or kiln dried it is then distributed to different weaving groups where it is wound onto bobbins to be used for weaving. Eighty women work at ACP’s facility in Kathmandu where they receive not only a fair wage but also skills, training, and a large social benefit package.

The fabric is then block printed, and finally passed on to the sewing unit. This group is supervised by sewing master Bijaya Laxmi Rana who ensures every piece is sewn to perfection.

Made by hand is uniquely beautiful. Our products are made by humans, not mass produced on automated machines. Minor imperfections and variations are to be expected as a characteristic of the artistry. Please appreciate these individualities for what they are, a maker pouring their heart and soul into a unique and beautiful piece of work for you.

Carved Soapstone Pink Bowl with Tree of Life from Kenya

The tree of life symbolizes the cycle of life, from strong roots to full branches to the seeds falli…

Set the table off right with a centerpiece style serving bowl! Hand painted one brush stroke at a ti…